At the CES Friday Keynote, Google co-founder Larry Page didn’t announce the Google PC or the Google OS as had been rumored this past week. Instead, he announced a new video download service with DRM and Google Pack. Since the new Google Video is not yet available (as of 1/7/2006 11:01:24 AM CST), I downloaded Google Pack to take a look at that offering.

Google Pack is a free collection of software from Google and other companies. The software in the Google Pack includes Google Earth, Google Toolbar for IE, Google Desktop, Picassa, Google Talk, Adobe Reader, Norton Anti-virus, Real Player, AdAware, Google Pack Screensaver, Firefox w/ Google Toolbar and a few minor other applications. This is only available for Windows XP at the moment but I am assuming MAC and Linux versions will not be far behind. 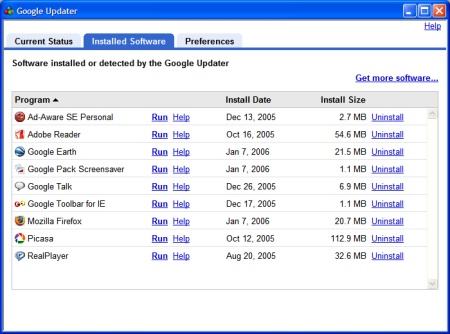 Most of the software included in the first edition of Google Pack seemed pretty obvious but the most interesting application missing was the Java Virtual Machine and Open Offier. Didn’t Google and Sun sign some agreement to include the Google Toolbar in every VM download and you would think Google would reciprocate and install Java 5.0 as part of the Google Pack. Google Pack is essentially a framework like Marimba to deploy software and so I am sure additional software will get added and be managed via the Google Updater.

My first impression of Google Pack is great – This is something useful and seems designed with simplicity and ease-of-use in mind. The user-interface is sparse and very intuitive and the update/download/install process is just great. No guesswork needed. Even my mom can install this and keep her software up to date and that’s a good thing. It was great to see Norton Antivirus and AdAware spyware removal tools included in this pack. Is this inclusion meant to compete with Microsoft and their latest virus and spyware offerings, Windows Live Safety Center? Sounds like a shot across Steve Ballmer’s bow – Get your chairs out of the way.