Thanks to Greg Luck, I discovered something new in iTunes called My iTunes that lets you export your purchases out as RSS or as a widget to display on your website. Check out a sample of my purchases below – With DRM free music from Amazon, I’m not buying anything from iTunes that’s available on Amazon. By the way, Greg Luck is one of the lead developers of Ehcache, which IMHO is the best and most widely used Java distributed caching framework.

Amazon launched their latest offering entitled Unbox Video which is essentially a video (TV shows, movies, etc) download to buy or rent service. Rumor is that Amazon rushed this out on Friday, September 8th to beat some super secret announcement coming from Apple later next week.

The Unbox video service doesn’t offer anything new and is in fact more of the same. I can buy a movie but I can't burn it onto a DVD to watch it on my TV. Media center PC's are exceptions if you have a Media Center PC hooked up to your TV or are using something like Media Center Extender to broadcast the output to a TV. The videos that you download from Amazon are DRM'd Windows Media (WMV) files and so you cannot put in on your video iPod. Apple essentially works the same way with their DRM but you since they control the mobile music and video player market; it's less of an issue. I'm guessing you've probably already got the sense that Unbox video is only for Windows and you would be right. No MAC or Linux support at this time.

There are 2 new concepts introduced that set Amazon Unbox video apart from iTunes and other similar services. To my knowledge, Amazon is the only one that will let you rent a movie by downloading it to your computer. You have 30 days to watch it and 24 hrs to complete watching it before the video is automatically deleted. I know Netflix is working on a download-n-rent but I don't believe that's available at this moment. Please correct me if I'm wrong.

Another concept that I consider a move in the right direction is the concept of the Media Library. Everything you buy or rent is in your Media Library on Amazon and so you can buy an item on 1 machine and download to watch it on another registered machine. Both machines must have the Unbox video player and be registered on Amazon as your machines. As an experiment, I bought a TV show on my laptop and downloaded it. I then copied the video over to my desktop and dropped it the directory where Amazon would expect its videos to reside. The Unbox player didn't see and I wasn't able to play it directly without downloading it from my Media Library to the desktop. The video player was smart enough to realize that the file was already there and started playing in seconds after it marked the video as downloaded on the desktop. The subtle point here is that if your computer crashes and you lose your purchased content, you will be able to download it from your Amazon Media Library. It would be interesting for Amazon to make this a paid-service and use their S3 service to automatically back-up your purchased content for you.

The video quality of the TV shows that I purchased was good and the sound was fine as well. I guess a true test would be to buy a widescreen movie and see if the Dolby 5.1 surround-sound works as advertised. All in all, the video service is nice but nothing earth shattering and left me wanting more. Another major issue with this offering is the licensing agreement that you agree to as part of the software installation and it requires you to apply all patches from Amazon whether you want them or not and Amazon can delete your movies if you uninstall their video player. Yikes! Doesn't like a lot like that Amazon we know and love, does it? More information at the uninnovate blog and CNet.

Why is it so hard to come up with a video service where I can buy a movie and burn it onto a DVD to watch it on my TV? I hate DRM but I understand the need to protect copyrights but there has to be a way to protect content and allow me as the purchaser fair-use of that purchased piece of content. I guess the key here is purchase – I am paying for something. Don't put limitations on my personal usage of that. Anyone that can produce a service that allows that will eat everyone's lunch. I hope Apple or Netflix or YouTube or dozen of the other YouTube clones/wannabe's out there come up with a way to legally distribute video content but allow the purchaser some flexibility on where they can view that piece of content. It would also be great if they could include some future-proofing on your purchase and so if you bought 2nd season of The Office with some proprietary DRM, you could exchange or upgrade it for any future format that's different without having to repurchase the movie all over again. Ah to dream…..

Vongo is basically a video download service that provides movies on demand to personal computers and portable media devices. Vongo Membership allows members access to their movie library but any of the recent movies are considered pay-per-view and not accessible under your membership. So I sign up for the standard $9.99 plan that’s supposed to allow me to view, download any movie and 3 of the movies I searched for at random were pay-per-view – i.e. no free viewing. To view those movies, you pay $3.95. The free movies that you can download ‘expire’ after a finite (3-months?) amount of time and so you can’t keep them forever – You are licensing the movie not really purchasing them and that’s fine

So I download Vongo to see what it’s all about – Sign up, log in and start downloading movies. Every time I try to download a movie, it schedules the download for another time instead of downloading right away. After I got past that, I decided to try out the live Starz stream while I wait for the movie to download and I get the following lovely error message: 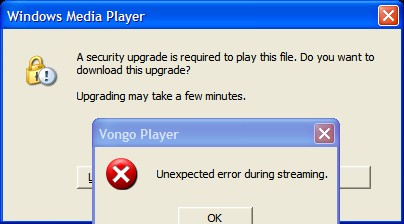 That was it for me – I uninstalled the application and canceled my membership. I hate companies that make you call and talk to someone about canceling your membership. The web is good enough when you want to take my money but not good enough when I want a refund. The person on the phone was very polite and pleasant and I got my refund right away. And the final straw was the uninstaller – I try to uninstall the application and it dies as some file is locked because the player is still running in my task tray. Why is the uninstaller not smart enough to detect any running instances that would have to be killed before it can proceed? I guess I’ll wait for the Google Video announcement tomorrow at CES to see if their application is any better. As much as iTunes sucks, it still is a pretty decent platform for music and video.