I finally upgraded my blog to WordPress 2.0 a few weekend ago and am now finally getting around to blog about it. I had blogged previously about issues I had upgrading my blog software but those issues were related to some MySQL upgrade and version compatibilities.  To get around the database issues, I used MySQL Administrator to backup the entire database from the old server and restored it on the new server.  Not sure why that worked, but it did and didn’t create any issues.  In the past, I had backed up the database using MySQL Administrator and then used the MySQL Query Browser to create the new database and insert the data.  I’ve spent a lot of time figuring out the differences between the version of MySQL and the issues I had and will post a lengthy (and boring) blog entry about that in the near future.

After upgrading the database, I upgraded my blog software to WordPress 2.0 and everything worked with the exception of a few minor issues.  One of the biggest issues I ran into was an internal rewrite issue where my blog is deployed under /blog and I had a page whose slug was blogs-i-read.  WordPress was generating a 404 for that page and I fixed this issue by simply renaming the slug to remove the use of the word blog. This issue is fixed in the latest maintenance release of WordPress which currently happens to be 2.0.1.  In addition, I had a problem with the awesome WordPress FeedBurner Plugin that was also related to rewrite rules but Steve Smith had already fixed that problem in the last revision of the plugin.

Since WordPress 2.0 had been working pretty smoothly and 2.0.1 was working in my development area, I applied that today to this site and it worked like a charm.  The biggest improvement (besides the bug fixes) appears to be performance.  It’s too early to tell if the numbers will hold up but here is a performance chart that shows dramatic improvement in performance since the upgrade. 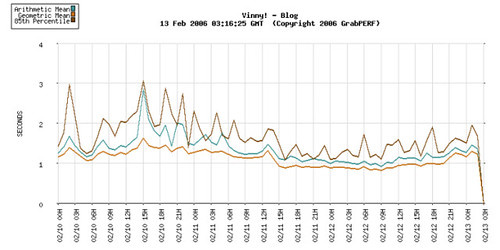